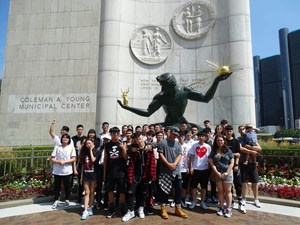 Students in their first year at the Weiming Michigan Education Learning Center in Troy started off the year with a visit to the nearby city of Detroit!
This Sunday, August 20th, new Weiming Learning Center students enjoyed a trip to Detroit, the largest city in Michigan. During the day, students visited Eastern Market, where they were able to meet Detroit- and Michigan-based artists and entrepreneurs and try local products. Students were also challenged to talk to and take a picture with at least one vendor, resulting in some great selfies! Following Eastern Market, students headed over to the Hard Rock Café Detroit, where they enjoyed lunch surrounded by rock music memorabilia. After a delicious lunch, students walked down Woodward Avenue, an important street in Detroit, to the Detroit Riverfront. There, students spent time at the Detroit River. Across the river lies Windsor, Ontario, which is the only place where people travel south from the United States to enter Canada! Finally, students visited Belle Isle, an island state park located in the Detroit River to finish their day of sight-seeing!
Published August 22, 2017 Print